The name of this blog comes from Lewis Carroll’s Alice in Wonderland, “Why, sometimes I’ve believed as many as six impossible things before breakfast.”  The quote hangs in my bedroom and is a wonderful mantra in the teaching world.

This was an abbreviated week due to the polar vortex that has affected much of the U.S.  School dismissed two hours early on Tuesday and has been cancelled every day since.

Before the unbearable cold temperatures arrived, I had two (almost) full days with students.  Missing from the days was my cooperating teacher due to previously arranged obligations. This provided me the perfect opportunity to test my knowledge of the students’ names.  I’m happy to say that I know almost everyone without hesitation; there are a few quiet students that still cause me some pause with name recall, but I’m getting there! The substitute teachers were both individuals I have worked with in the past, so that helped the days flow a bit more easily.

I used my time with students this week to get to know them better and try to engage in some talks about their books.  The classes are completing book group novels and preparing for a final project. As such, I am trying to read as many of the books as I can to keep up with their discussions.  I’ve enjoyed the books I’ve read: Grenade by Alan Gratz, A Monster Calls by Patrick Ness, and All American Boys by Jason Reynolds and Brendan Kiely.  In our discussions this week the students were introduced to some new literary terms and somehow this prompted a student to ask me “Uh Ms. Poole, you’ve seen Star Wars right?” (“Much to learn you have.”)  I find this to be further evidence of the similarities in all children… random questions abound.

Tuesday the temperatures began to plummet and the snow began to fall.  A two hour early dismissal was announced the night before so we had the benefit of not scrambling to get lunches in or hoping and praying that buses were ready.  I did help with dismissal in the car line and enjoyed watching the kids (and teachers) catch snowflake on their tongues. 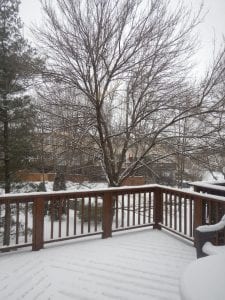 Since that afternoon, I have been enjoying the time at home, mostly curled up with a good book.  I’ve completed March Book 1 by John Lewis and Andrew Aydin; it’s a graphic novel (beautifully drawn by Nate Powell) depicting Mr. Lewis’ early work in the civil rights movement.  I’m now in the midst of How It Went Down by Kekla Magoon and I’ve elected to start a self paced class offered by edublogs: “Personal Blogging for Teachers.”  Be on the lookout for new additions to the blog with all that I’ll be learning!

I still have the weekend ahead of me and the forecast says that temps will be going back up.  Here’s hoping! I need to get moving again, but until then, you can find me curled up with my book.

The night before I started my assignment I struggled to keep my head together.  I’ve know that this day is coming for months, yet its arrival was unnerving.  I had sudden fears of what the next day would bring- new faces, new experiences, new everything.  I got up in the morning (with a welcome two hour delay) and fortified myself with Starbucks. I could do this… maybe. 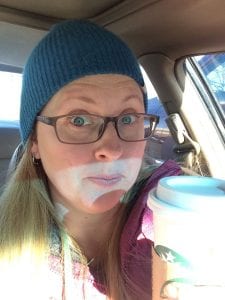 The rest of the days moved forward without as much anxiety.  I am now four days in and know eighty to eighty-five percent of the students’ names.  I should clarify that I know these names if they are in class and sitting in the correct seat.  On Thursday and Friday the students moved around for book groups and I quizzed myself with a bit lower accuracy.  I’m getting there though. By the end of next week, I should be good to go. At least that’s the plan.

One of the things I said before moving into this experience was that in my daily work with kids, my day doesn’t change much between first and fifth grade.  Kids are kids and get distracted and need reminders and generally want consistency in their lives. Yes, the smells are different. The attitudes are different as well. Very few older kids voluntarily give hugs every day to a teacher, and that is how it should be. However, kids are kids; the needs are the same. After a week with eighth graders, I still hold this belief.  Example: Tuesday there was a two hour delay. Multiple students asked “What time is lunch?” Another example: Thursday was a very rainy day. It was raining when the students arrived. You could hear the rain on the roof.  Our classroom has two windows on different walls. During the first two class periods, I heard at least four different students ask “Wait, is it raining?” And I can’t count how many students have raised their hand after a question has been asked only to say “Well it has nothing to do with what we are talking about, but can I get a drink of water (or go to the bathroom).”  Again, kids are kids. 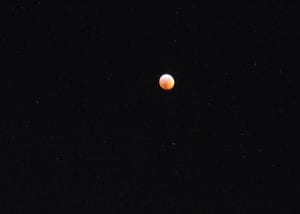 Last Sunday there was a full lunar eclipse.  It was freezing outside, but I kept returning to my deck with my camera to try to get a shot of the beauty in the sky.  This is what I return to when I’m doubting myself… find the beauty and keep looking up.

Today was my last day in my regular job as I move on to my student teaching internship next Tuesday.  It was a roller coaster of a day. All days in a school are, but this one was different. I’m leaving these kids at the midyear point.  I will return near the end. And this is the time of year where things get interesting, especially in the younger grades. Kids who couldn’t write a complete thought are now compiling paragraphs.  Words are spelled correctly more and more often and I don’t need to use quite the same phonetic decoder skills as in the fall. It’s an exciting time to be in the primary grades. 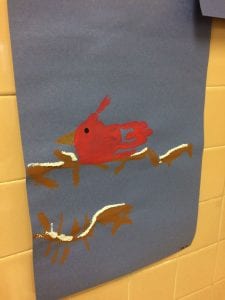 My first grade students and I read a beautiful book called A Stranger in the Woods: A Photographic Fantasy by Carl R. Sams II and Jean Stoick.  It’s a fun adventure after a snowfall as the animals try to determine who the new stranger in their habitat is. As part of this read aloud, the students and I created a fun winter craft, complete with handprints and glitter.  These are the projects I will miss as I move to work with older children.

To top it all off, I was gifted with a card made by each of the first grade students complete with artwork and the advice to “be safe.”  I was also given a beautiful orchid from a fifth grade student I have known throughout her elementary career. The card she wrote brought tears to my eyes.  Not seeing that smiling face every day will be a challenge, but the beautiful orchid she gave me will be a daily reminder… I just need to keep it alive.